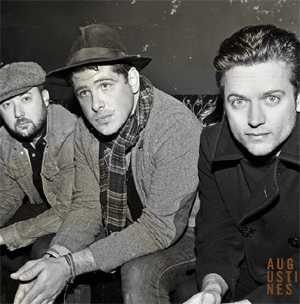 Augustines is a scrappy band from Brooklyn who deliver a rumbling set of heartfelt, mid-tempo rockers on this second album. Their front man Billy McCarthy is a rough throated Hard Knocks graduate who doles out endless tough luck lessons on this record. McCarthy has the power to be bold, soulful, and larger than life. Of course, he can also sound like a middle aged barroom bum or a downtrodden David Gray. He’s backed by a ragged crew or at least the production would have us believe that their sound comes directly from a cheap rehearsal space. The truth is that they’ve recorded in the hallowed Abbey Road Studios. Think of Augustines as a Kings of Leon for New York. They’re an electric Mumford outfit rummaging through a U2 playbook. However, they’ve got something good here when you’re in the mood for a shouting stomper.