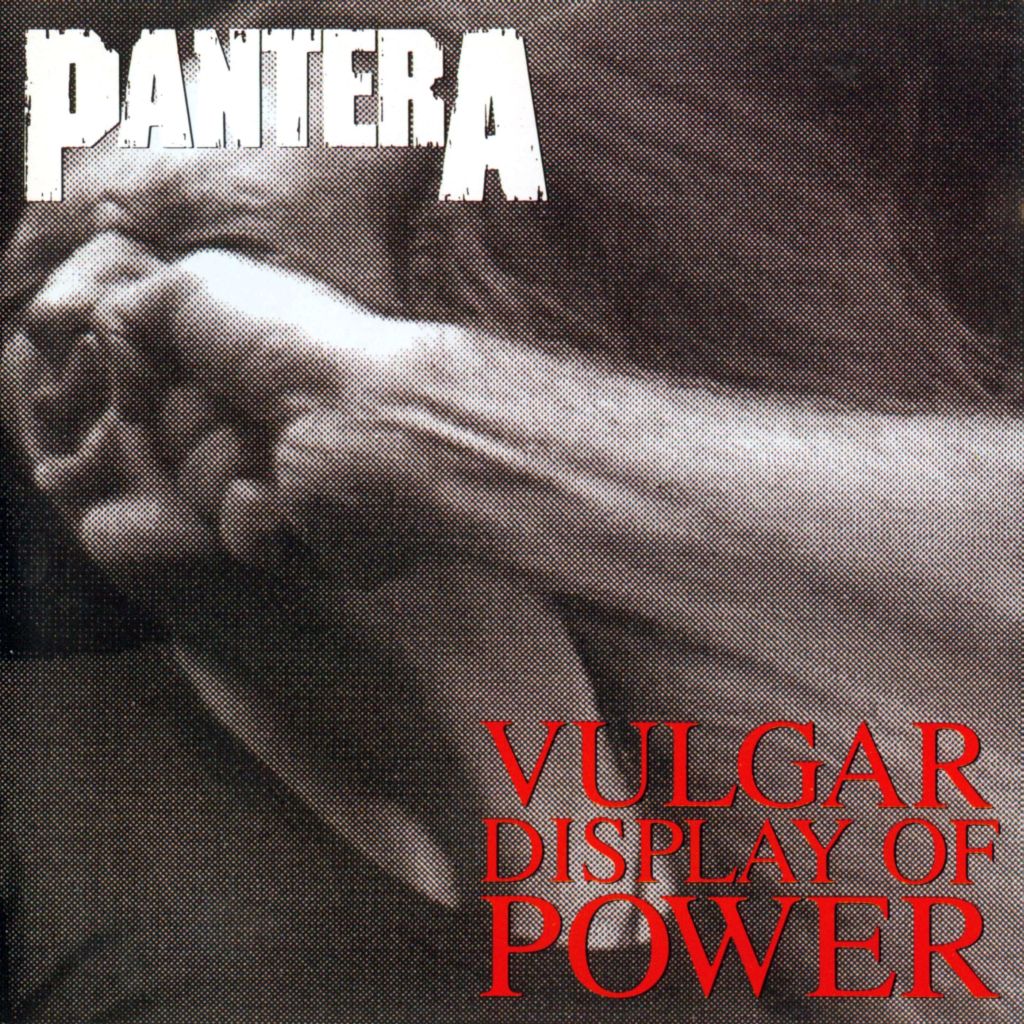 The eighties was a terrible time for hard rock music for the most part. Don’t get me wrong, I loved it. The videos, big hair, pyrotechnics, makeup, etc. was fun at the time. I should mention that I was a child, so I have an excuse. Being born in 1977 meant that I was just entering my teenage years as the 90’s were beginning. These are the most formative years in a person’s musical life, and I just missed having those years filled with hair metal. Pantera began with a little of that. If you Google their early band photos from before they were signed to a major label, they had some teased hair, a title makeup, they referred to themselves by nicknames like, “Rex Rocker”. Once they recorded their first major album in 1990, “Cowboys From Hell”, they had shed most of that style. CFH is a solid metal album. A fantastic first effort, and yielded some fan favorite songs. It was only a hint at what was to come….. 1992 saw the release of their second album, “Vulgar Display Of Power”. The album cover is a black and white freeze-frame of someone getting punched in the face. Never has an album cover so perfectly depicted what you were about to listen to. Saturday nights in the early 90’s meant staying up until 11:30 to watch Headbangers Ball on MTV. It was the only time that you could see metal videos on TV. Riki Rachtman would introduce us to bands like Sepultura, Kyuss, Faith No more, and Pantera. I still remember the first time I saw the first single off of Vulgar, "Mouth For War”. It was brutal! I had been listening to thrash metal for a long time by then, but this was different. There were faster bands out there, but Pantera had SONGS. Real songs with hooks. Phil Anselmo’s voice was vicious. He’s like the guy who calls square dancing, (you know….the “promenade your partner” guy), except the dance we were doing was moshing. VDOP was THE soundtrack to mosh pits in the 90’s. I saw Pantera on this tour when they came to The Auditorium in Rochester. The Auditorium is a seated theater. Whoever booked them in this place had no idea what they were doing. My friends and I had 2nd row tickets, so I got to experience this show the way it should be experienced. When we left the show I had caught Dimebag Darrel’s pick and my friend left holding the seat he had been sitting in. (it had began being bolted to the floor) Awesome. Show. Back to the album. Sorry about that segue, but I’m listening to the album as I type this and I’m getting all pumped up. The album is filled with potential singles from start to finish. "Mouth For War" was first. “Walk” was a huge hit on Headbanger’s Ball, and “This Love” is a ballad in the only way Pantera can do a ballad, with lyrics like, “I’d kill myself for you. I’d kill you for myself”. The one song that could never be a single, due to the lyrical content, is “Fucking Hostile”. Phil counts off, “1,2,3,4!”, and you are completely assaulted for the next 2:49. It can’t be any longer than that or someone would die in the mosh pit. It’s angry and breakneck fast, but in typical Pantera fashion it’s still super catchy. The most important aspect of the band though, was Dimebag Darrell. Dime was an amazing guitar player, and I HATE using the word amazing. Since his biggest influences were Randy Rhodes, Eddie Van Halen, and Ace Frehley, his songwriting always had killer riffs, but maintained a pop sensibility. I use the word pop only to imply that it appealed to the masses. His technique was clean, his tone was always killer, and his solos had imagination while serving the song. As if all of this wasn’t enough, Dime was also one of the truly great people in all of rock. He’d spend time with his fans, sign every autograph, and pose for every picture. I’m speaking of him in the past tense because he was tragically gunned down while performing in 2004. Heaviness in metal is a tricky thing to quantify. I don’t find most death metal or grind core to be nearly as heavy as Pantera, and I think it’s because they always kept the music within realistic song structures. Vulgar Display Of Power kicked the final boot to the face of 80’s hard rock, and many of us still have the battle scars and tinnitus to prove it.