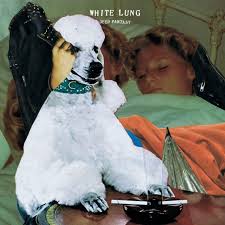 Deep Fantasy is White Lung’s 3rd album, but I don’t remember ever hearing the other two. I frankly didn’t really know that there was a Canadian punk scene until I started reading about them. They’re a 3 girl/1 guy punk band, which brings to mind Hole, but White Lung are more of a real punk band. They’re not totally straight forward punk, in that there are occasional riffs that have a more metal tone to them, but 98% of the band is punk in it’s pure form. Earlier this year I reviewed Perfect Pussy’s “Say Yes To Love”. I can’t help but compare the two a bit, since they’re both fronted by women with strong vocals. Both bands play at breakneck tempos and have an average song length in the two minute range. Where PP has an unbridled furry that seems out of control at times, White Lung is a bit more organized in their sound. The guitar riffs are a bit more memorable, and the vocals are a bit clearer. (it’s punk music, so that still means you can only understand about 15% of the vocals) White Lung sounds to me like the Canadian/female fronted version of Cloud Nothings. I’m not trying to infer that Deep Fantasy is better than Say Yes To Love, just that there is a difference to all of the noise these two bands make. I’ve seen Perfect Pussy mentioned on more reviewers favorite albums of 2014 lists, but I think the two albums are comparable. I gave Say Yes To Love 3 stars, but I’m going to give Deep Fantasy 3 1/2 stars, because that extra bit of memorable riffage is worth the half star. If you’re looking for a better album than Cloud Nothings put out for us this year, this might hit the spot.