The Birth Of Metal 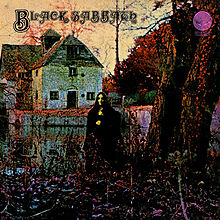 Honestly, I don't think I need to give any history about this album. You all get the gist. The most influential heavy metal band/album. This pretty much birthed the entire genre. In fact, the first 60 seconds alone, birthed the genre, and accidentally created doom metal while it was at it. I didn't know anything about this band until two weeks ago. I sorely missed out, again. The only thing I knew about them was their name, of course. Over the past two weeks, I have got myself acquainted with them. And, as you would expect, no disappointments here. I might be repeating a lot of what people say about this album, so do excuse my ignorance. Anyway, let's go through the tracks.

Our first track is not only No.1 on the album, but the first ever heavy metal song. "Black Sabbath" opens with some haunting bells chiming, and rain pouring. Then the instruments make their entrance. I'm not a complete newbie to metal, and I've listened to some extreme stuff. But this was genuinely haunting music. Ozzy's voice was chilling as fuck, and the lyrics elevated the scariness to another level. We get to the 4:30 mark, and shit gets real. I don't want to praise it too much though. Personally, it wasn't really a favourite of mine. Yes, despite all those reasons above. It was just too slow and long for me. But nonetheless, it is one of the most influential metal songs made, and deserves any credit, despite what I say. We then move on to one of my favourite tracks on the album, "The Wizard". Absolutely love this track. Great use of the harmonica by Ozzy, and his vocals are pretty damn good. His singing is really catchy. It does sort of repeat it self, but I have no complaints. Solid song. "Behind the Wall of Sleep" is my other favourite from the album. Honestly, I wouldn't say Ozzy's vocals are the best I've heard, but despite that, they flow perfectly with every song. This one being an example. And I love the riff that flows in between each small verse. Brilliant stuff. The next track is "N.I.B.". We get some strumming, and then the main riff kicks in. And a great one at that. And I fucking loved that solo towards the end. Great vocals by Ozzy. I'm not a fan of vocals that don't have anything to them, and sound a bit plain. But Ozzy manages not to go overboard, and keep a haunting tone in every song.

Onto side two, and it goes just a bit downhill for me. We get a cover of a Crow song, called "Evil Woman". Wasn't a huge fan of it. The chorus is pretty catchy, although I guess I would have to give credit to Crow themselves. Ozzy delivers it well, but it felt a bit bland. Onto "Sleeping Village". Highlight of this song had to have been the solo. Nothing really interested me other than that. I like the nice calming atmosphere at the beginning, but the solo was what stood out to me. Not that big a deal for me. And so we move onto the final track, "Warning". And what a borefest. Not a fan of these long ass jamming tracks. Seemed really unnecessary. There were a few moments that stood out, but too much shit to wade through. Side one was excellent, but it was brought down as a whole by side two. Oh, well. Stay tuned for my thoughts on Paranoid, which I absolutely enjoyed.

Posted by Justin Aspinall Back