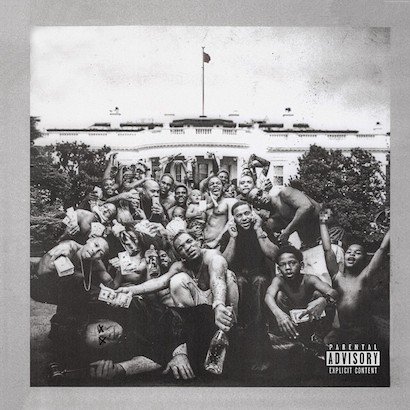 To Pimp A Butterfly

To Pimp A Butterfly is a high water mark for rap albums. It’s Kendrick Lamar’s career defining album. The album blends funk and jazz with more traditional hip hop production to make an ambitious work that doesn’t feel forced in any way. The multi-genre production doesn’t feel like a bunch of separate ideas sandwiched together, but rather that it’s all supposed to be exactly as it is. It’s one, singular, complete statement, from a young prodigy in his prime. Am I over-selling it? Maybe, but this is the type of album that all rappers should aspire to, but most don’t have in them.

At the heart of the album are Kendrick’s lyrics and delivery. He’s said that he’s not so much a rapper,  but more of a story teller. His poetic style creates an album that is both extremely personal and socially conscious. He’s at times boastful, humble, teacher, student, preacher, pawn, careful, reckless, and honest. His spoken word passages weave through the album, tying everything together.

Musically the album is the sum of so many parts, yet it just feels like one complete idea. He allows James Brown and Prince influences to slip in, while coming back top his Dr. Dre/Compton roots. Aside from the musical influences, Kendrick feels like he’s in control of his vision and message in the way Brown lead his live band, or Prince produced Purple Rain. The guest spots show up in the right places, but not too much. The jazz and funk influences are obvious, yet not excessive to the point that the albums ends up as something it’s not. Thundercat's presence is felt, but not overwhelming, and the same goes for each producer involved. The pacing of the album is such that the spoken word, hip hop beats, jazz, and funk flow through each other in a way that brings you along with them. The heavy subject matter is appropriately addressed, yet it doesn’t hold you at a distance.

It’s hard to write about To Pimp A Butterfly without being a little overly dramatic, because it’s an album that’s different than the rest. I was torn as to whether to give it 5 stars or 4 1/2, because that 5 star badge seems so precious. I ended up deciding on 5 stars because, well…. what the hell else do I want from an album?!