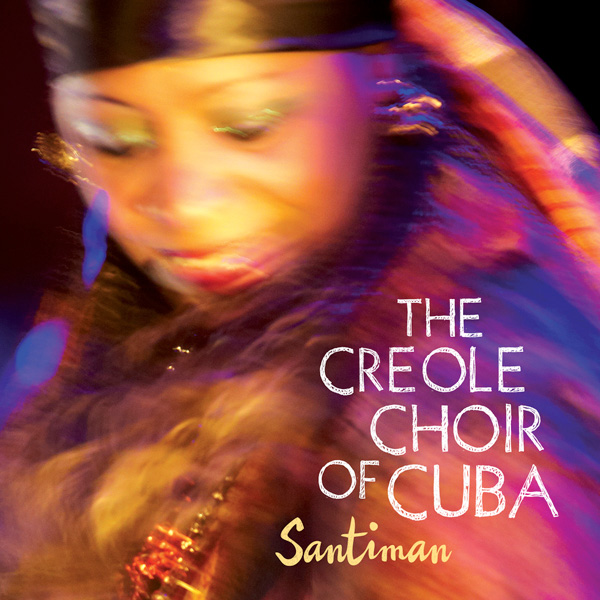 I am quite ignorant when it comes to world music but there's usually at least one title a year that resonates deeply. The frequency with which I discover new albums in this genre may have something to do with getting older. Any day now I'll probably abandon the thirty-something chant of 'modern music is appalling!' and officially disappear into an arm chair with Perpetual Bach lulling my headphoned skull into a dusty sleep. Let's table the idea that World Music leads to Classical for a moment and focus on The Creole Choir of Cuba. I'd love to write that I was introduced to Santiman by a fan who caught a rare, early performance by the group while globe trotting. It would be lovely to say that I experienced this album at some cultured friend's fondu party while lounging on an expensive oriental rug and sipping at a glass of Bordeaux. The truth is, of course, that I was sitting in traffic and listening to NPR. (Side note: I wish someone would have told me five years ago NOT to start listening to public radio in the car. I haven't played an album while behind the wheel in ages! It's gotten bad. I neglected to bring a single compact disc on a recent four hour road trip. Rather than search for local independent radio stations on this journey, I scoured the airwaves to hear Scott Simon. I could have revisited my favorite albums from last year to see how they hold up but no, instead I crossed state lines while listening to Lakshmi Singh. Does Robin Young know the addictive quality of her work? I bet Peter Sagal and Robert Siegel get together on the golf course off air and laugh manically at the dead eyed silence of their bewitched fans! Do not get me started on Tom Ashbrook.) The Creole Choir of Cuba have put together a fine collection of songs on Santiman that highlight the vocal skills of each member. Their music uses a wonderful variety of rhythms, harmonies, and styles. I whole heartedly recommend this deep feeling album. What have we learned here? First, Santiman is a superb record! Sit for three minutes and listen to the standout track 'Fey Oh Di Nou'. Second, for goodness sake beware dear reader! It's entirely possible that World music is the gateway drug to owning an extensive catalogue of Mozart albums! Oh, and NPR killed the radio star!