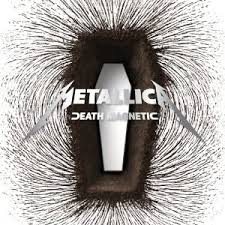 Metallica spent the first 10 years of their career inventing and defining American Speed Metal. They spent the next 14 years experimenting with pseudo-bluesy rock, bad haircuts, and addiction problems. They seamed lost, meandering from one album to another, and losing sight of their place in music. Enter Rick Rubin… Rubin has made a career out of steering artists back onto the path of creativity, and he does no less on Death Magnetic. Metallica return to what made them one of the most important bands of the last 25 years. DM combines the intensity of “…And Justice For All”, with the hooks of the self titled “Black Album”. There are brutal metal tracks like “My Apocalypse” & “Broken, Beat, & Scarred”, there are epic tracks like “The Day That Never Comes”, and massive hook-laden tracks like “All Nightmare Long”. The album brings back the amazing arrangements that made Lars and James the premiere metal song crafters, and back are the guitar solos. Kirk Hammett is seemingly let out of his cage, attacking each song with his wah-wah pedal. I could do without the rehashed “Unforgiven III”, but other than that I have had 5 different favorite tracks from this album. If you aren’t already a fan of “Master of Puppets” or “Ride the Lightening”, then you won’t be converted by DM. The rest of us however, are raising our devil horns into the air and banging our heads in full on Bevis and Buttheadian glory.